Sometimes I like looking ahead, but with the summer just settling in, it's kinda sad to think this far down the road to September. Of course, fall is my favorite season, but I'm also rather partial to summer as that's when I tend to take the most time for my family.

You didn't come here to read this drivel though, did you? No, you want Doom Patrol news! Or reviews. Or tidbits. Snippets. Or other information.

Well, look no further. Courtesy of my fine friends over at Comic Book Resources, here's the covers and solicit text for Doom Patrolish comics in September:

Lets start with a comic related to the Doom Patrol via writer. Here's Magog #1. I must admit, I'm at a loss that this character has his own series, but with Giffen and Porter on board, I'm game. 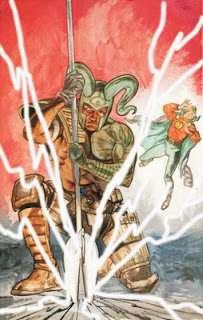 MAGOG #1
Written by Keith Giffen
Art and variant cover by Howard Porter & John Dell
Cover by Glenn Fabry
Introducing the latest member of the Justice Society of America to break out into his own monthly series!
Tired of chafing at the restraints that being a member of the JSA put upon him, Magog decides to take justice into his own hands and track down who’s behind the dealing of high-tech arms to lowlife scum around the DC Universe! Be here as the hunt starts Magog on the path to discovering his own unavoidable destiny thanks to writer Keith Giffen (JUSTICE LEAGUE INTERNATIONAL, DOOM PATROL) and artists Howard Porter and John Dell, the acclaimed team behind JLA! Retailers please note: This issue will ship with two covers. For every 10 copies of the Standard Edition (with a cover by Glenn Fabry), retailers may order one copy of the Variant Edition (with a cover by Howard Porter & John Dell). Please see the Previews Order Form for more information.
On sale September 2 • 32 pg, FC, $2.99 US

Beast Boy's having some loneliness issue in the September issue of Titans. 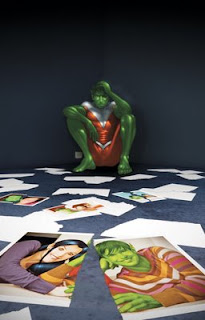 TITANS #17
Written by Pat McCallum
Art by Angel Unzueta & Wayne Faucher
Cover by Angel Unzueta
Spotlight on Beast Boy! Gar Logan grows tired of not being taken seriously by his Titans teammates. And what he plans on doing about it will shock you!
On sale September 9 • 32 pg, FC, $2.99 US

Beast Boy's appearances in Titans have not been great. He's been there, but he hasn't been a scene stealer by any means. Throughout the whole "Deathtrap" storyline he was mopey and whiney, and judging by the cover for Titans #17, things won't be changing any too quickly.

Not to mention Beast Boy's issues in Blackest Night: Titans. 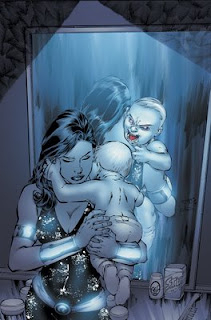 That is one creepy zombie baby. Can there possibly be anything creepier than zombie babies? I, for one, wouldn't dare think about changing a zombie baby's diaper. Ewwwwwww.

Sorry. Tangents happen all the time around these parts. 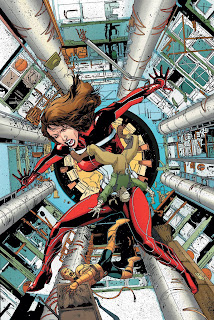 I had not seen this cover - nor any of the stages it went through - until now, so I must say, it's surprisingly cool. Clark's knack for detail wows me every time. Not only that, but his enthusiasm for this book shines through in every piece of art I see for this title. I like the color of Rita's jumpsuit (which, I gotta admit, if you're going to grow taller than most people, a jumpsuit is so much more practical than a skirt). In Matthew Clark (and Keith Giffen with Livesay) I trust.

So what do you all think of these September offerings? Any other books catch your eye?
Posted by Doug at 12:31 AM