Doom Patrolers have a very Merry Christmas! Keep warm, enjoy any time off from work you get and thanks for checking in.

I'll be back hopefully over the weekend for a post or two.

Until then, here's some pencils (and inks!) from Matthew Clark for the last page of the last issue. 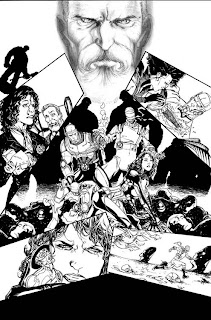 Yeah, it kinda is a re-gift (Thanks Matthew!!!), but would you have seen it elsewhere? Only here, Patrolers, only here.
Posted by Doug at 7:44 AM 5 comments:

Negative Monday, today, is going to focus on the Negative being(s?) in the most recent issue - Doom Patrol #5. Giffen could have gone in so many different directions with the Black Lantern DP going against the living, but he decided to put the seemingly logical connections together. In this case, Larry Trainor was challenged by the reanimated Val Vostok, who, somehow, brought along a semblance of the negative being with her.

The static between Vostok and Trainor is nothing new - Kupperberg touched on this in his take way back in Volume 2 - but here, Larry exerts his control of the negative energy in a surprising manner, especially considering "Vostok" took Larry out in a hurry in the last issue.

Rather than blather on, I'm going to share the confrontation with you. Read on to see what happens when two Negatives enter into the equation. 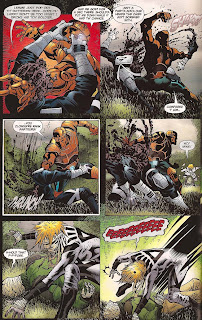 Larry maintains his personality all the way through, even as Black Lantern Vostok seems to have the upper hand. 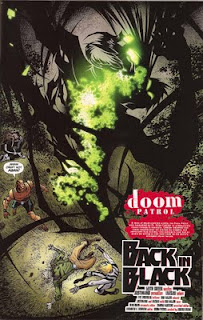 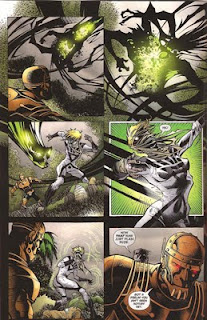 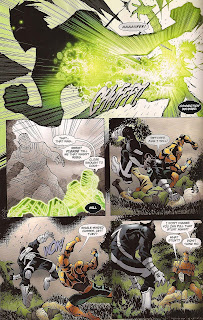 A few of you have wondered aloud in the comments section why Cliff was referring to Rebis. Honestly, I don't know. the best I can hypothesize is because the two negative beings have seemingly merged, but I truly suppose we'll only find out more next month with the return of Matthew Clark when the spotlight shines heavily on Larry in

I quite enjoyed the Blackest Night issues. Sure, it is a little disappointing that the DP couldn't wrap up the challenge in these pages, but it appears as though the Patrollers - with Cliff not really registering in the Black Lanterns emotion spectrum vision and Larry single-handedly defeating one of the Lanterns - might help turn the tide and win the war against the Black Lanterns.

I guess we'll find out more about the DP and their involvement in this struggle on December 30 with the release of Blackest Night #6.
Posted by Doug at 11:55 AM 6 comments: 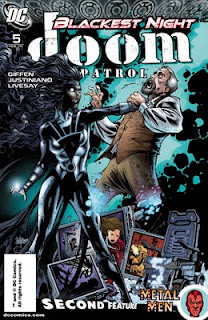 So the second issue of the Blackest Night crossover is here and gone. I reviewed it for Comic Book Resources, so here's a link for that. I didn't say so in my review, but to me, this issue is worth the price of admission for the cover alone. Of course, next issue's Maguire-inspired, Matthew Clark-drawn cover is just as worthy.

If you're not feeling linky, well, here's a small excerpt.

Giffen handles the "Blackest Night" crossover delicately. In these pages, the encounters with the Black Lanterns are loud and gory, but the conclusion to the Black Lantern story doesn't happen here. Apparently it'll happen back in the main pages of "Blackest Night." To be sure, some readers will cry foul over that decision, but in doing so, Giffen focuses on the Doom Patrol and their dead demons and closet-based skeletons. Rounding out the Doom Patrol part of this title is a teaser page that is handled like a movie poster. A nice fun way to wrap up this issue and entice temporary Doom Patrol readers into coming back next issue.

Tomorrow will be another Negative Monday (which won't be negative for me at all, as I'm taking a day off from work!) and Tuesday I've got another nice little surprise for you. Beyond that, well, let's just see what happens together.
Posted by Doug at 5:55 AM 2 comments:

You guys are so kind and patient. I'm recovering nicely, work is getting back on track, housework is shaping up, so I've got a bit of spare time to dedicate to this blog. Spare time and something cool to share.
You may have seen, you may not have, but here's a link to Popfunk.com, an online store with only the most uber-cool apparel. Including a Robotman t-shirt. Aw, yeah, Robotman! 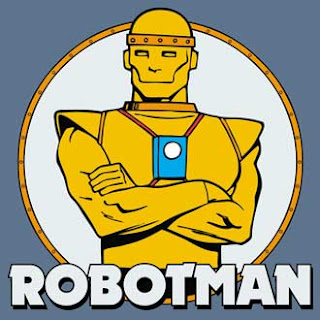 The art looks like an extremely enlarged image (that was enlarged so much it lost all of the Pérez-panache) from George Pérez's Teen Titans run to me. What do you guys think?

At any rate, there's a wonderful idea for your favorite DP fan, who just may happen to be yourself.
Posted by Doug at 5:42 AM 1 comment:

Four on the Eighth with Matthew Clark

Hey all!
I promised it a bit ago, and here it is: four more questions - complete with answers! - from Matthew Clark. Well, the questions are from me, then answers are from Mr. Clark.

Without further ado, read on, Freak Fans, read on.

MGA: What was the first order of business once you came onto the title? Was it character designs? Talking to Giffen about who should and shouldn't be in the book? Running around the house, screaming in sheer joy?

MC: My first thought was to just do some sketches not with the intention of re-designing them just start drawing them and let them come about organically. Then a chat with Keith about his intentions, along with general ideas. Then back to the drawing board, I knew after the chat and meeting with DC during a con about the approach. I asked to tweak the core group. Robotman I wanted to get closer to the BP [Bruno Premiani] look but still add a bit of my flavor. Negative Man I ditched the trench coat I wanted him to stand out more, and Rita, after the talk she needed a full body suit. More on that later. From my opinion the new designs need to reflect their origins and personalities/vocations of who the were. So when I did Cliff's new look I needed something that said "sportsman" and the biker shorts did just that. Larry was a test pilot so he need to look like a flyer. Rita was a bit tougher because she was a actress so her look when I was doing the inital sketches were that of a silent film star. But after a bit I couldn't make it work, then I was watching The Avengers with Emma Peele and it just clicked for me.

MGA: We've seen some of the character designs and sketches on your MySpace, what is your creative process surrounding coming up with a character's look? Any more concepts you want to share (I'm thinking additional designs of characters John Q. Public has already seen, not any spoilers, unless you prefer it)?

MC: Nothing I can share at the moment. First thing is I established a sense of past with the look of the book. All the characters designed for the book are from different periods in time. Cliff, if you look at the concept of the piping design on his face and chest, is very much in the 50s style Rita is loosely the 60s female spy. Larry is a 1914 RAF pilot. Dusty, the pilot for the team, is the Red Baron. The Chief is turn of the century Edwardian/Steampunkesque. Cale's main Body guard, Colt - seen in issue #2 - is a French Soldier from 1812. So on and like that so when I get the script or when Keith and I talk about someone new I try to come up with an era to base the look on. Once that is decided then I check for reference and begin the research. I'll start to send off designs to Keith and Liz [Gehrlein] to get comments. I'd send a image of a returning character [ to me - DZ] but that would spoil things.

MGA: If you were completely in charge of this title, what Doom Patrollers would be on your team? Anyone you would add who hasn't been a Patroller before?

MC: I have all the Patrollers' I've been wanting to draw. I'd add Beast Boy, but I understand why we don't have him. He was a part timer in the original series along with Mento and that's what he'd be in our book and he's a Titan now, so let him shine there. I'm sure he'll be in our book soon.

MGA: How has working with Keith Giffen on this title been? Does he give you room to breathe a bit?

MC: It's been a complete pleasure working with Keith on DP. I'm not just blowing smoke. This has been a dream come true for me. I'm a fan of his from way before I wanted to draw comics. I have a similar sense of humor and he's very open to my ideas. He wants the artists that work with him to give him suggestions and input. Heck, I sent him a design and the next thing I know she's [the character Clark designed] front and center and he added a bit to who she is and her background. He didn't have to, but Keith saw something in the design that worked for him. The character is Porcelain Doll and she makes a cameo in issue #5. We went so far as to have Keith do layouts like the old JL book with J.M. [DeMatteis] and Kevin [Maguire]. I want DP to have a Giffen flavor. He loves these characters and I want that to reflect in the book.

We love these characters too! Thanks again, Matthew, for more fabulous insight!
Posted by Doug at 12:24 AM No comments: