Getting the Lead Out Part 1

[Editor's note: this post has been waiting. . .waiting. . .waiting to be be posted. I've preserved the integrity of the post as I typed it, but please be aware that new developments are already in the works and/or complete]

Some of you folks might be aware of the Eaglemoss line of lead figurines. I first happened across these things somewhere around 2006. I had seen a few of the figurines at comic shops, but hadn't bother to  purchase any.

At this time they were only producing Marvel characters under the brand Classic Marvel Figurine Collection. The first one I bought was the ever-lovin' blue-eyed Thing. 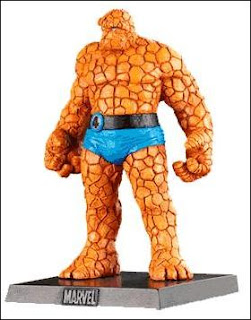 From there I bought Spider-Man. Then I vowed to get the Champions, my favorite Marvel hero team from my youth. Except I couldn't pass up Captain America. It would be. . . well, un-American! So I bought Cap and then decided to fill out the ranks with the characters from Avengers Forever - the core team. Except Iron Man looked really cool and so did Falcon. Eventually, I just decided to get whatever characters I wanted and could afford.

Each of the lead figurines comes with a magazine. The Marvel ones have a timeline across the bottom that  offer up recommended critical issues for that character, while the DC magazines tend to be a little slimmer and not as informative overall.

The prices vary depending on where and when you buy the figurines and a subscription model is available in the UK.

What does all of this have to do with the Doom Patrol? I'm glad you asked.

Eaglemoss has since produced a line of DC figurines under the brand of DC Comics Super Hero Collection. They've already produced a few Doom Patrol-related characters, with the core trio of Doom Patrollers set to release in the calendar year of 2012. I'll be taking some time over the course of the next week (or two) to talk about these figurines and their accompanying magazines a bit. I'm going to start with the ones that have already been released. From the image below, can you guess where I'm starting? 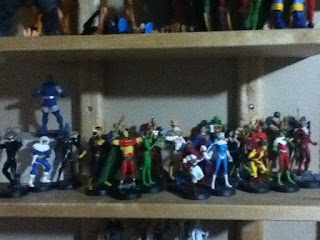 Cosplaying Some Doom at DragonCon

The ever-lovin' Irredeemable Shag recently returned from DragonCon with a veritable boatload of images of the cosplyers he found down in Atlanta. Among the notables are Rita Farr and Cliff Steele as shown below. 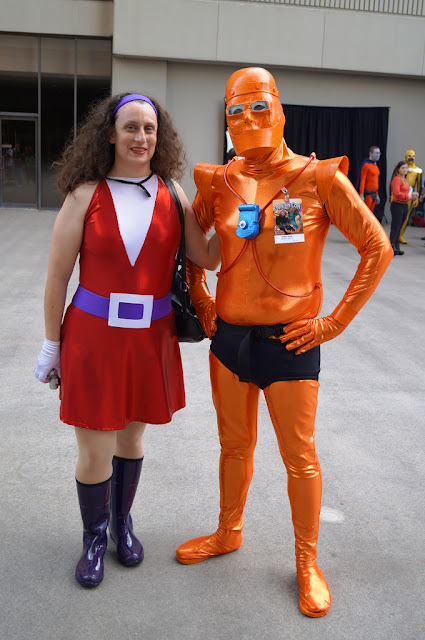 I've been to a few cons and I've even covered costume parades for a certain comics news site, but I do not ever recall seeing any Doom Patrollers. Seems to me Negative Man wouldn't be too bad a choice for a con costume.

Shag has shared the love with a plethora of other websites, some of which are listed right here:

Check out those other sites and come on back to MGA80 soon.
Posted by Doug at 1:30 AM 3 comments:

Over on his Facebook page, Matthew Clark dropped this little beauty on his friends. 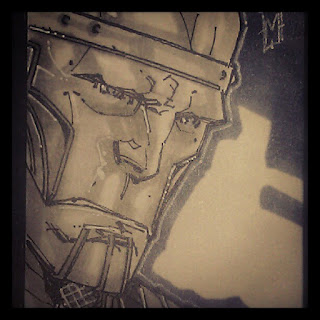 Kinda makes you wish you had some more Giffen-Clark DP to look forward to, doesn't it?!

We already know Beast Boy (such as he is) is going to have a part to play in Ravagers, but in August, it looks like Gar Logan takes a star turn as the cover model.

THE RAVAGERS #4Written by HOWARD MACKIEArt and cover by IAN CHURCHILL and NORM RAPMUNDOn sale AUGUST 8 • 32 pg, FC, $2.99 US • RATED T• Betrayal, revelations, blood, and DEATH come to the group as some find themselves powerless to the seductive charms and horrific powers of BROTHER BLOOD.• RIDGE is prepared as a blood sacrifice to indoctrinate the newest members of Brother Blood’s cult.• NOT everyone will survive this fatal encounter.


I'm not super-thrilled with "The Culling" to this point, but I am looking forward to these titles - and Ravagers in particular - following said Culling.
Posted by Doug at 6:24 PM 2 comments:

So I was catching up on my episodes of Young Justice with my kids a few weekends ago and meant to post about episode #21 titled "Image". This episode introduced a young Garfield Logan and his mother. It also put the team into conflict with Psimon and shared a tremendous amount of Miss Martian's secrets.

Over the course of the story, Gar becomes injured and has to receive a blood transfusion. From Miss Martian. The pretense here is that Miss Martian can shapeshift at the cellular level, so her blood cells could shapeshift to match Gar's. Long story short, that sets everything up for Garfield Logan to return as the Changelin- er, Beast Boy.

The second season of Young Justice is given the subtitle of Invasion and propels the storyline forward five years. With that advancement in the story, there is also a change in lineups, with the Young Justice team now including Lagoon Boy, Blue (Jaime Reyes) Beetle, Batgirl, Wonder (Cassie Sandsmark) Girl, Bumblebee and a new Robin (Tim Drake). Oh! And Beast Boy.

From Phil Bourassa's Deviantart page, I found this image, of Beast Boy in full-on Beast Mode (apologies to both Phil and Marshawn Lynch).

Beast Boy has never been my favorite Doom Patroller, nor Teen Titan, but I do find that I enjoy the character on occassion. Young Justice (so far) is one of those occasions. I like the blend of Changeling costume and more permanent animalistic features. Bourassa's work really updates Gar without making him look any sillier than a green boy who can turn into any animal he can think of should ever be.

As promised, here's a bigger, closer look at the Robotman sketch from Franco. 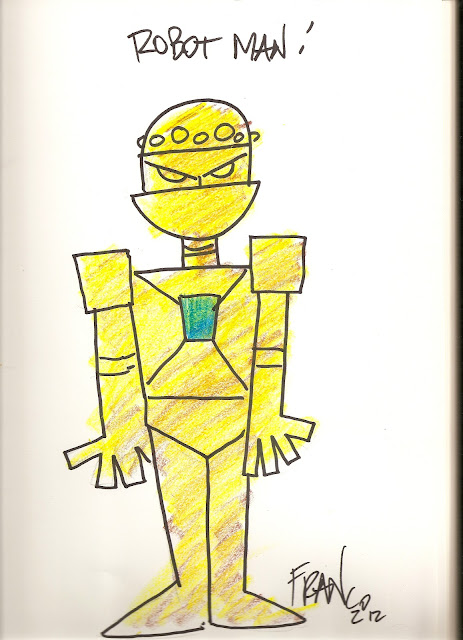 Hi again, my friends and surprise! Hell hasn't frozen over!
Just wanted to really quickly post an image from C2E2.

I'll post a closer view of the sketch soon, but figured I owed you all a little awesomeness to make up for my extended absence. More very, very soon.

One of my extracurricular activities involves working with a little place known as Back to the Past. One of my cohorts there, Dave, did a pair of articles reflecting the end of 2011 and the start of 2012. He chose to focus on Doom Patrol, The Fugitive, and Captain Marvel. An interesting mix, to be sure, but a fun one nonetheless.

Of the beginning of the Kupperberg-Staton DP, Dave said:

The group even starts off fighting General Immortus…it really was old home week with the Doom Patrol.

Check out the links and enjoy the read. Here's the beginnings, and for all those completists in the crowd, here's the endings. 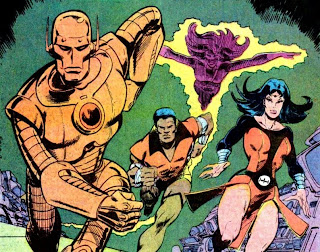 As for the beginnings (definitely prefer those to the endings) I'll be offering up some thoughts on the current My Greatest Adventure series soon.