Regardless of the size of the con or its focus on media, memorabilia, or moola, there's simply no denying that there will be comics to be had, comic creators to talk to, and Doom to be Patrolled! I'll only be there tomorrow, but my day already has a couple planned highlights, such as:

1. Chatting with Matthew Clark and picking up a sketch from him.

2. Picking up a shiny load of Doom Patrol stuff. Yes, I know what it is. No, I'm not telling. At least not until sometime over the weekend.

3. An interview with a creator whose work I adore for a site that I love.

Some shopping and frivolous spending of money. Maybe even connecting with an old friend or two or making a new friend or three.

* I don't really know where Motor City ranks in regards to con size, but twenty-ninth sounded good. Of course this IS Alan Davis' only United States appearance this year.
Posted by Doug at 8:34 PM No comments:

As shared on Comicosity, Gerard Way has posted some new thoughts on his blog. Check out the Comicosity link or the blog post proper. For now, and in the interest of sharing, I'm just going to re-post this image of Robotman from Nick Derington that Way shared in that blogpost. 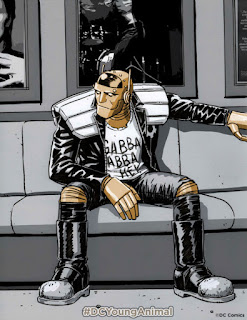