Episode 89: I Drive the [CENSORED] Ambulance

I love new Doom Patrol weeks. Love. Them. The only thing that makes it any better is when the issue of Doom Patrol is exceptional, as Doom Patrol (v6) #5 is. You can check my review of it out over on Comicosity. I won't repeat any of that stuff here, save for a quick quote.


Doom Patrol #5 is the first time Larry Trainor, Cliff Steele, Flex Mentallo, Casey Brinke, Sam Reynolds, Danny, and Fugg are all brought together. So, in a sense, this is the first true issue of the new volume of the Doom Patrol. And it’s so damn fun. So much happens in this issue that by the end of it, it feels like a collected edition.


There. That's done. Now, here's the link for the corresponding Waiting for Doom episode.


Celebrate good times as we cover a brand new issue! There are spoilers and swear words in this one, so consider yourself warned! LET'S GET PATROLLING!
Down on Derington Way - 8:03Doom Clock - 11:45Doomsplaining - 15:51 - It's time for a brand new issue! HUZZAH! We cover issue 5 of volume 6, from Gerard Way and Nick Derington! Mailbag O Doom - 41:19 - We read your responses to the question, "What is your favourite fictional vehicle?"


And here's the images of the issue. With one exception, I'm just going to share panels, not pages. So let's get going on the issue that brings the Whole Patrol (and then some) back together. 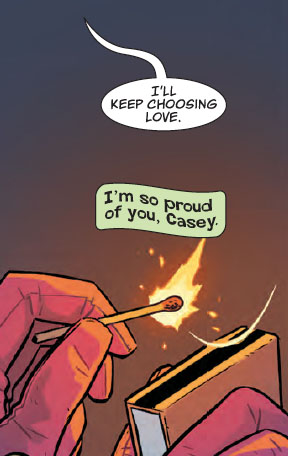 Since the issue is so very recent, I'm trying to preserve the sanctity of the content while sharing its awesomeness. That's not an easy balancing act. I want to show you everything, but if you really want to see everything, then why don't you just buy the issue?

One last thing before closing this up, this piece from Way's Instagram: 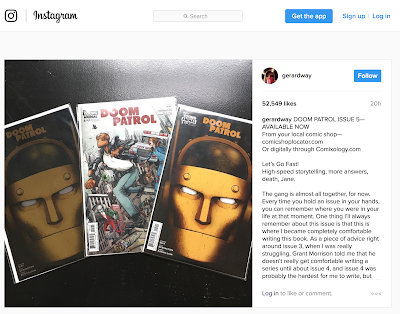 And the text of the post, in case it's too small for you (plus the scroll doesn't work in the image).


The gang is almost all together, for now.Every time you hold an issue in your hands, you can remember where you were in your life at that moment. One thing I’ll always remember about this issue is that this is where I became completely comfortable writing this book. As a piece of advice right around issue 3, when I was really struggling, Grant Morrison told me that he doesn’t really get comfortable writing a series until about issue 4, and issue 4 was probably the hardest for me to write, but once I got through that everything started to move a lot faster, and I had a lot more confidence—I felt like I knew what I was doing. I had a tremendous amount of fun writing this one, and the issue that follows it. Again, I want to thank everyone for their dedication and patience in allowing us to get the book right. I feel we are getting closer to the schedule getting more regular again, and we’re doing our best to make that happen. Next week, we’ll get an awesome Director’s Cut of Issue 1, so be on the lookout for that.On the left, you’ll see the metallic version of the awesome main cover by Nick Derington, followed by the remarkable variant by Farel Darlymple, and then the regular (also awesome!) non-metallic cover to the main.Farel and I went to school together in NYC at The School of Visual Arts, and not only is he an awesome human but also an incredible artist.We also get another little gem from Brandon Bird in the back of the issue, the newest installment of Bane’s Coloring Corner, a somewhat presidential one.Lots of love
The team killed it on this one, and here they are:Credits:DOOM PATROL #5Written by Gerard Way (I mean I did ok)Art and cover by Nick DeringtonColors by Tamra BonvillainLetters by Todd KleinVariant cover by Farel Dalrymple"Bane’s Coloring Corner" by Brandon Bird

Episode 88: Snakes On A (Dimensional) Plane OR Can We Talk About Teeth-Nipples?

It's time for some more Doom Patrol goodness. Let's start with the Podbean description:
Just as one era ends for the Doom Patrol, another begins, raising several questions, such as one asked by a famous archaeologist: "Snakes....Why did it have to be snakes??" 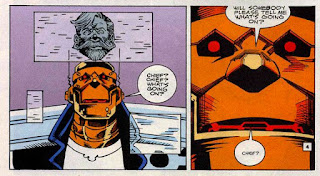 Down on Derington Way
Mike and Paul had a little bit on Derington Way this week, as we're all nearly giddy with anticipation of getting a new issue of Doom Patrol on 22 March. That said, it's been a rather thin week or so for news from either Gerard Way or Nick Derington, but "thin" does not mean "non-existent."

As so many artists do, Gerard Way chose to share some insight into his writing process, including an overview of his tools.

And what would this section be without a Derington-direct tweet?
As requested by the gents, here is the link for Ross Pearsall's Super-Team Family site.

Jay Bandoy provided some of the images to WilFreD (thanks for the goose, Jay!). If you've somehow missed this in your life to this point, you need to fix that. Now. Here. Your first one is free.
I'll even throw in a cover of Thing and Robotman, for Steve Lacey of the Fantasicast. 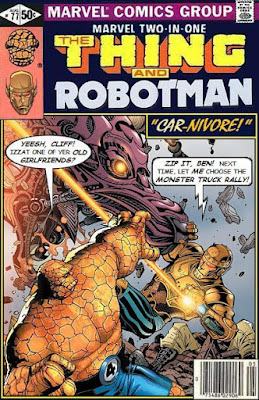 Question of the Week
What is your favo(u)rite fictional vehicle?

Episode 87: Come In Out Of The Rain OR I Believe It

After a brief hiatus that is nowhere near as long as the wait between Doom Patrol issues, Mike and Paul are back with another wonderful episode of Waiting for Doom!

From the Podbean feed:
There is another world. There is a better world. Well...there must be.


Down on Derington Way - 13:09
Doom Clock - 17:35
Doomsplaining - 20:36 - This week we reach the end of another era in Doom Patrol history, as we take a look at issues 62 and 63 of volume 2, from Grant Morrison and Richard Case - Morrison's final issues.
Mailbag O Doom - 58:12 - We read your responses to the question, "What piece of Doom Patrol merchandise would you approve?" 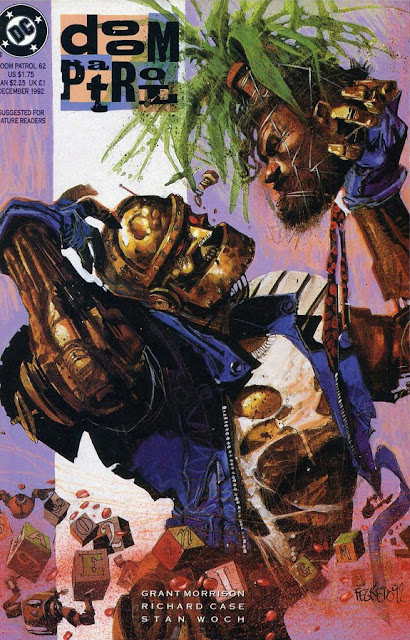 And Grant Morrison's last issue on the Doom Patrol, #63.

Here's a peek at the goings on in that issue:

Derington Way
As always, the guys took a stroll down Derington Way. And, as always, I still owe y'all that Derington by Way of Bonvillain bit. We'll get there. I promise. 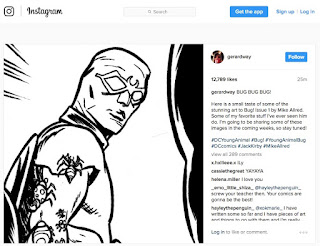 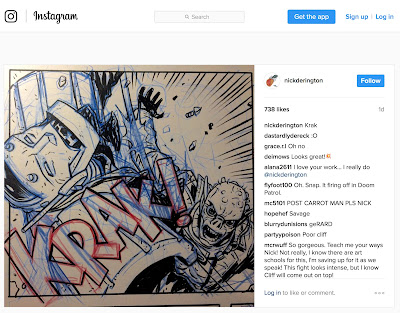 And a couple tweeted images. 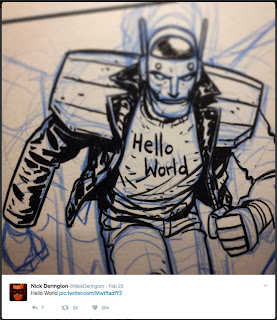 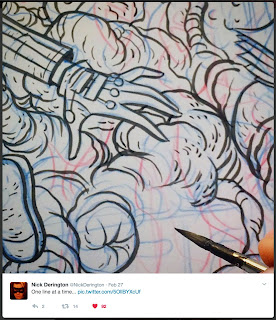 A little added bonus!
New construction on Derington Way! And it's Allred!
Previews World posted an interview on Sunday, 12 March 2017. You can check it out here. It's about Bug!: The Adventures of Forager by Lee and Michael Allred coming up from Gerard Way's Young Animal line. The first issue is available in May, so be sure to check it out if you're a New Gods fan, an Allred fan or someone just looking for an offbeat new read. 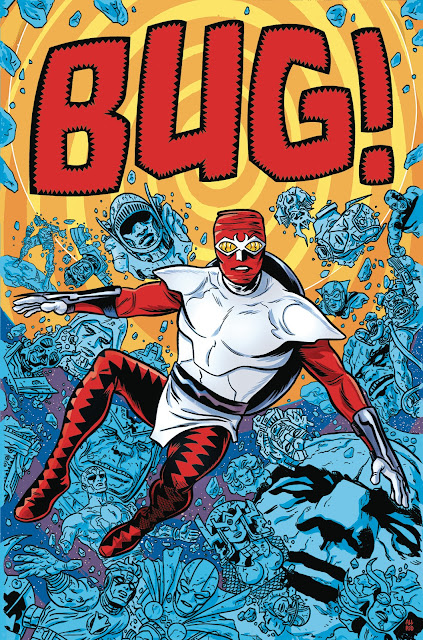 In the interview, Lee Allred says, "Forager is a child of two worlds, belonging to neither. Not the underground Bug Colony, not the floating sky-city of the New Gods. That alienation, that search for one's own place, is a unifying theme of Young Animal titles."

And there you have it, another post on My Greatest Adventure 80 to match a wonderful episode of Waiting for Doom.

Tune in next week when the fellas field your answers to the Question of the Week:
What fictional character would you like to see join the Doom Patrol?