Episode 83: Just Don’t Let It Happen Again OR We Don't Talk About My Karate! 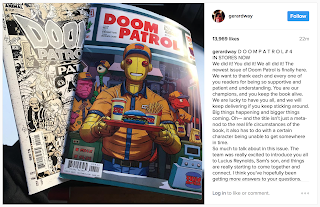 Before we get onto the coverage of the episode though, here's a bit from Gerard Way about Doom Patrol #4.

It was a bit tardy, sure, but well worth the wait. I subscribe to the theory that I'd rather have a completed vision by the intended creative team delayed if necessary than a patchwork beast stitched together simply to maintain a deadline.

Besides, Derington's artwork is timeless, so when you re-read this issue, there's just no way you'll ever remember anything even remotely resembling a delay.

So here's the rundown about Waiting for Doom Episode 83 from Podbean.


Episode 83: Just Don’t Let It Happen AgainSurly teens! Revelations in outer space! Prison ships! Cassette tapes (ask your parents)! Nematodes! This weirdness can only mean one thing - time for more Doom Patrol! Let's get Patrolling!
Doom Clock - 4:38
Doomsplaining - 7:52 - It's a non-Waiting week! HOORAY! This week we dive into issue 4 of volume 6 by Gerard Way and Nick Derington!
Mailbag O Doom - 48:30 - We read your responses to the question, "Which powers (and disadvantages) of a Doom Patrol member would you most want to have?" 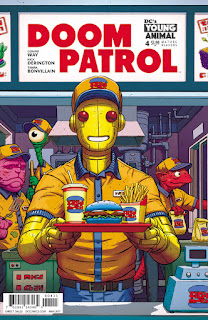 The issue opens with Sam (Casey Brinke's EMT pal from the first issue of this volume) trying to get his fifteen-year-old son, Lucius, to stop his sorcerous ways (evidently he really liked Doctor Strange as well) before it rouses Lucius' grandmother. Sam and Lucius have a heart-to-heart in the form of shouting at each other, and the scene cuts with Sam heading off to put his mother to bed.

From there, Cliff Steele (Robotman), Larry Trainor, and the Negative Being (who we learn is named Keeg - that's geek backwards) arrive in the Negative Space, facing N'Hall, the Negative Entity. Paul pronounced it "na-HALL" on the podcast, but in my brain, I was reading it "en-HALE", kind of like "inhale".  Think of the entity what you will. Call it what you will.   As a graduate of a fine arts program, I have to say this Negative Space looks nothing at all like the negative space my teachers would always talk about being around our life drawing models or between still life components. Maybe those profs weren't so educated. . . 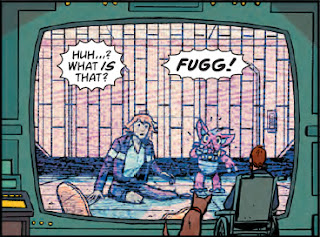 Anyway, as each of the three prior issues have done, this one checks in on Niles Caulder, who, to no one's surprise is being quite voyeuristic with a giant monitor. And a dog.

The other side of the monitor is the robotic being Caulder was assembling in a previous issue, but he's deactivated now, setting up a nice transition to Casey Brinke and Fugg.
Casey learns a bit more about herself. We see Ricardo (from issue #1) again, and an escape attempt is made.

Returning to the Negative Space, Larry Trainor and Keeg Bovo stand trial for violating the Ninth Law of the Negative Space.  It is also revealed that Trainor has violated the First Law. So an issue that was going to provide some answers (and it does) also begins constructing the legend and the law of Negative Space. Nice bit of worl - universe-building there.

In the course of the trial, Larry is given a chance to speak and to declare his preference.
Back in the prison setting where Casey, Fugg, and Ricardo find Danny the Ambulance, their escape plan becomes more cohesive. Not without a bit of bickering, some new revelations, and Casey Brinke (rather Gerard Way through Brinke) vocalizing the underlying desire of Doom Patrol collectors everywhere: we'd like action figures, please. 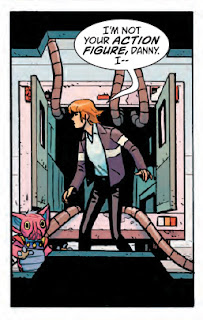 Danny regales Casey and the reader with how he came to be where he was in the first issue of the series, a story that brings back Crazy Jane. Just me, or do we all now also want Crazy Jane t-shirts and trading cards with Nick Derington art?
The escape comes together. The Vectra are appalled. Their leader revealed, and a cliffhanger is set. Hopefully we won't have as long a wait between issues, but we'll at least be able to re-read a nifty quartet from Way, Derington, Bonvillain, and Klein while we're waiting for Doom Patrol #5.

So, while we wait for the next issue, remember: 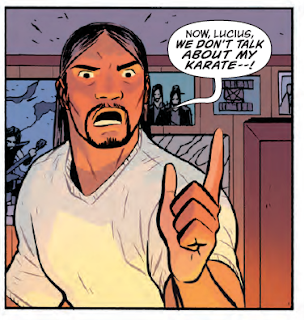 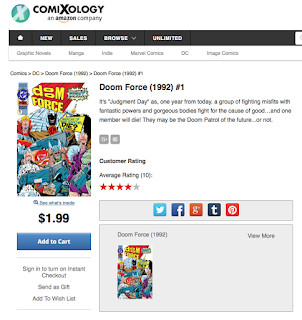 So there you have it, Patrollers, another issue of the awesomely enjoyable Doom Patrol. Before you go, be sure to sound off:

Didn't we JUST do this?! In all seriousness, it's been a busy week around here. Please accept my apologies for not keeping in closer step with Mike and Paul.

Here's the details of Waiting for Doom Episode 82.

Sunshine, lollipops and, fun-filled comic books, are, not what you will find in heeeeeere! Everybody SING! Yes this is definitely the wrong place for any of that light-hearted stuff. Let's get Patrolling!   Down on Derington Way - 5:38  Doom Clock - 10:18  Doomsplaining - 13:08 - This week we return to volume 2 of Doom Patrol, and take a look at a pivotal turning point in the team's history - issues 56 and 57, from Grant Morrison and Richard Case! Mailbag O Doom - 48:30 - We read your responses to the question, "What is your favourite cliffhanger?" 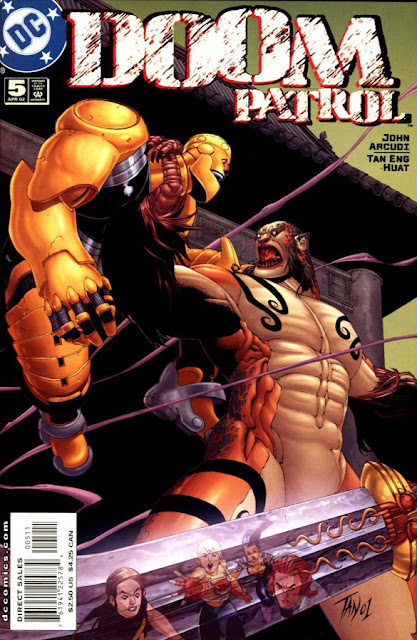 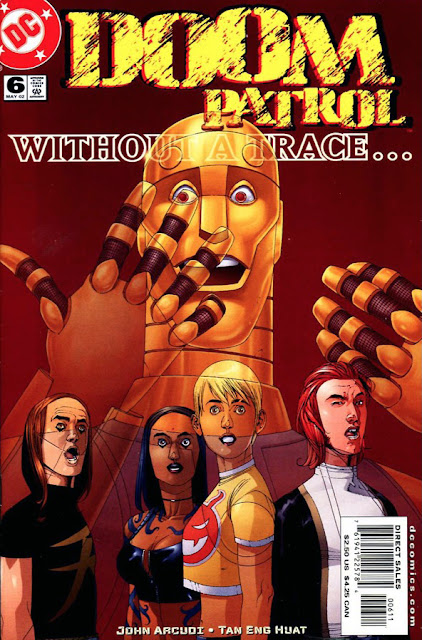