While we've all been waiting for the Doom Patrol to get their own series back, DC has been letting us wait. Thankfully, Jeff Parker has other ideas in mind. The DP have made a number (that number, so far, being 2) of appearances in Parker's Justice League United, with the promise for Robotman to show up as part of the squad.

CBR has a nice little interview with Parker, which you can check out right here. Said interview is where I borrowed this lovely image - a glorious Tony Harris cover for Justice League United #14 featuring our guy, Cliff! 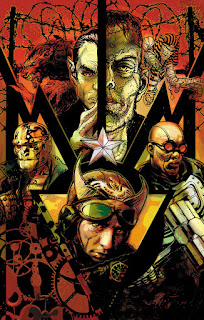 Added bonus? Creature Commandos. Looks like it might be the New 52(ish) version of the Commandos, which I am completely OK with, but man. Harris covers. Gotta love 'em!
Posted by Doug at 8:24 PM 3 comments: