Looks like we've got some more Doom Patrol plastic perfection headed our way! According to Julius Marx over at Action Figure Insider, Robotman and Beast Boy have been confirmed as members of the 10th wave of DC Universe Classics figures!

Other members of that lineup include Man-Bat, Joker, and Power Girl.

Here's PG from Action Figure Insider (in case you couldn't tell by the watermark). 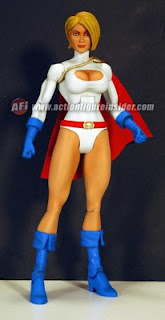 The downside is that this wave is a Wal-Mart exclusive. That kinda sucks for folks who either don't have a nearby Walmart or flat-out don't like Walmart.

No word on who the "Collect and Connect" is, but I'm hoping it'll be Rita Farr.

As always, when I know more, I will gladly share!
Posted by Doug at 5:34 AM