This is an exciting Negative Monday for me. The first issue of the Giffen/Clark DP is officially solcitied, and later today the rest of the August releases will be revealed. Check back tomorrow for a closer look at those releases that hold relevance for the DP.

For today, however, let's take a closer look at the page that was offered up on The Source last week.

Here's a panel with Larry and Cliff that closely follows the two panels below. In this panel, Larry has sent the Negative Man off to do his work, and as usual, Larry's a little drained from the experience, serving more as a liability here as he burdens Cliff to apparently watch over him. Or maybe this scene just depicts the two characters sharing a special moment since the two of them have always been so tight. Not. 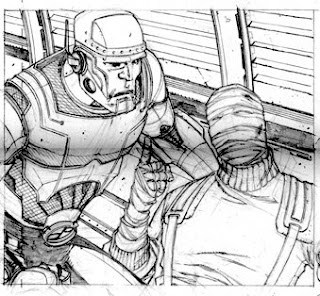 In the two panels below we can see the actual Negative Man in action. Clark has rendered an energetic being quite unlike any incarnation of the Negative Man we've seen before. I like the crackles that emanate from the energy being as he's bustling about. Hopefully the color does this effect justice. 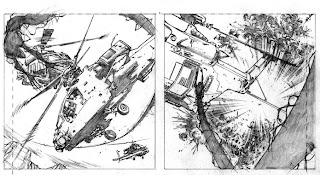 This book has been keeping me buzzing - after all it was the impetus that sprang forth this blog - and now as we get closer, I'm more and more anxious to sit down and read the darn thing.

I'm sure there will be plenty more teases between now and August 5, but for now, we'll enjoy the pieces we have available.
Posted by Doug at 5:33 PM