So I had a chance recently to have a little conversation with Matthew Clark about the preview images The Source hit us with earlier in the week. Read on, my friends. Read on.

My Greatest Adventure: What went into your design for Rita Farr?
Matthew Clark: A few things went into the design some will be revealed during the course of the series. I wanted to keep a slight retro feel to the look but update it for today's reader. The color scheme is still the same red and white. When I went into designing them I wanted something from their history to be in the designs. Rita is supposed to be a movie star so I wanted to bring that out a touch. I figure some of her movies (most B grade) were in the sci-fi genre. So I looked at costumes from Dune (movie), Avengers (BBC) Doctor Who and others. One of my early designs for her was a silent film look like Louise Brooks, but while a interesting design it wasn't very superhero. So after a few days I hit upon Rita's new outfit or using a DUNE reference this is Rita's Still Suit. 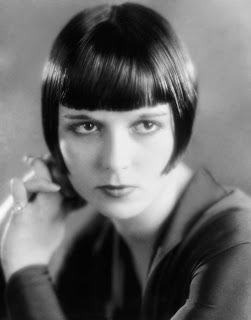 MGA: Did you have anyone specific in mind when you started drawing her?
MC: Emma Peel (Diana Rigg) from The Avengers, her outfits were awesome so that led me down the path we see in the outfit today. Clearly from the sketch i used Ms. Riggs as the model for the body position. On my blog I had done an Emma Peel sketch for a fan and that opened the flood gates. Initially, it was more 60's retro looking outfit but that was to close to Emma's classic Avengers outfit so I started adding onto it. I still want that feel though so I downloaded several Emma Peel images and keep them near my table when drawing Rita for inspiration. 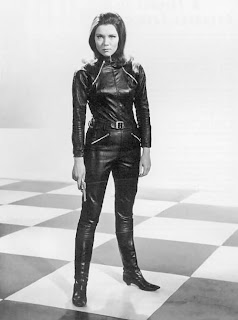 Rita Farr
As you can see, Matthew had some great ideas. His Rita Farr has a classic elegance without being archaic. With all the subtle redesigns and modernizations, Clark is doing a fabulous job bringing the Doom Patrol into the modern age without sacrificing their original Silver Age charm.

I'm certain Matthew and I will be in touch a little more as the series draws closer. Until then, keep on coming back. Especially since there's another sliver popping up soon. . .
Posted by Doug at 12:12 AM