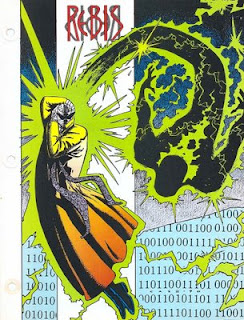 Astute observers of this little blog may have noticed I haven't been resplendent with my observations of Morrison's time on the DP. There's a good reason for that - it chased me away! Morrison hit the DP around the time I was doing the whole "finding girls, learning to drive" scene. I just didn't need to try to figure out Morrison's take on the Doom Patrol when I was already spending precious braintime trying to figure out the fairer sex.

That said, Rebis needs a little love on a Negative Monday. What better way to introduce "hir" to these virtual pages than with a Who's Who entry, rendered by DP series artist (at the time) Richard Case. 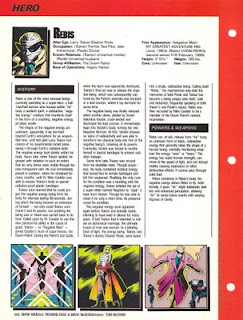 With my confession out of the way, as I begin to dive into Morrison's DP, I'll be taking the lot of you with me. I've read some of the issues when they were released a few since, but I walked away from Doom Patrol for a time, destined to return when the team returned to the DC Universe proper - not necessarily by design.

Please do not take this as Morrison bashing. It is quite the opposite, I just couldn't handle Morrison, girls, my first job, looking into college, driving, girls, and girls at the same time. Morrison's Animal Man remains one of my favorite titles ever, and it didn't cause me mental gymnastics as I recall encountering with Grant Morrison writing Doom Patrol.
Posted by Doug at 1:42 AM