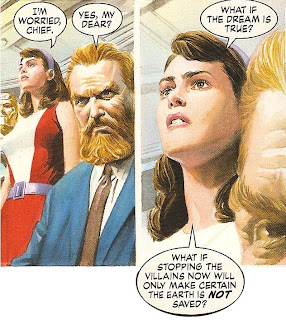 A quick one today. This is from the Jim Krueger-Alex Ross-Dougie Braithwaite Justice series from 2005-2006. Ross claimed it was his love letter to the Super Friends, but he didn't hesitate in the slightest to include more of the DCU.

Available in floppies, hardcovers, softcovers and a soon-to-be-released Absolute edition, this book is an amazing spectacle of characters and creative talent. Not only did the Doom Patrol appear, but they once more took a shine to Aquaman (who is central to the action and plot of this story) and Elasti-Girl tussles with Giganta.

DC Direct went on a tear making figures from this story, but stopped just after the Justice League, some wacky variants and adjunct members Batgirl and Supergirl. I cannot help but wonder how cool it would have been for them to continue making figures and offer up a Doom Patrol based on Ross's art.
Posted by Doug at 4:03 AM