I'll admit I'm a latecomer to the DC Comics Presents party, but better late than never I always say! I was more of a Marvel Team-Up kid growing up. After all, Spidey was my first favorite superhero, so he always remained near and dear to me, and MTU always gave you a second cool character. Besides, the DC characters I really liked were in Justice League of America. Firestorm eventually got a second series, so I could follow him there.

DCCP never apppealed to me mainly because I wasn't a huge Superfan. When I was working on the Hawkman Companion, however, I tracked down a few issues of DC Comics Presents and enjoyed them enough to track down a few more. I found the issues with Firestorm. I bought the one with Vixen. Aquaman was a must. Imagine my surprise, however, when I picked up this issue, cover dated December of 1982 and found that it co-starred the DP and also introduced Ambush Bug! I didn't know that - or perhaps I did, but didn't realize it - when I was hunting this issue down.

How much did this gem set me back you ask? One crisp dollar. Worth ten times that in my opinion. And more of my opinion (along with more than a few images from the inside) follows later this week. For now, enjoy the cover drawn by some "Giffen" guy. 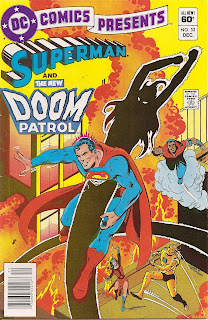