So it's not Friday, but it is another Elasti-Woman entry for y'all!
I had every intent to post this last night, but spent some time with the family hound at the vet, which is no way to spend a Friday evening.

Anyway, here's one Rita page from the issue that just came out Wednesday. 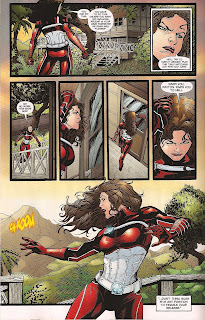 The art on this one is clearly from Ron Randall as opposed to Matthew Clark, but Livesay, in my opinion, did a fabulous job providing the visual glue to hold this issue together.

After the events of Blackest Night (which is in our future, two weeks or so from now) the Patrol retruns home, and Rita has a score to settle with a certain Mr. Steve Dayton. Lucky for Mento, there's an explosion that brings the core DP running to the Oolong airfield. We've seen the preview at the end of issue #6, Rita's destined to have it out with Dayton. How that all plays out remains to be seen.

One point of interest - at least to me - is the color shift in Rita's eyes. They were very green to start this series, but now they're rather olive, almost gray. Keith Giffen made mention that there was some significance behind this, but what it truly is remains to be seen.
Posted by Doug at 8:10 AM