There are some characters who have always seemed like natural shoe-ins for DP membership in my book. For whatever reason though, it just isn't possible for many of these characters to make the leap.

We've already touched on some of the times Aquaman interacted with the DP. Fans of any incarnation - especially Arcudi's and Byrne's versions - understand how logical a fit Metamorpho would be. Power Girl seemed to stop by quite a bit. One character who really seems like a natural fit to me is Red Tornado.

Here's the most recent connection from the current Justice League of America series, specifically issue #22. After his body was compromised, Red Tornado is stored in the JLA computer systems. Issue #22 features an all-star cast of characters brought together in an attempt to place Red Tornado in a new body. In his own words,

Today, several of the smartest men in the world will attempt to move the set of programs and data that constitute my sense of self into a new artificial body. 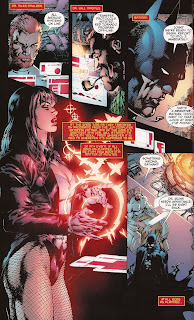 The first one Reddy mentions is Niles Caulder, the DP's beloved (ahem) Chief. Caulder shows up again a time or two in JLA, but never really says much. The fact that he's called upon - not to mention the current base of operations for the DP on Oolong Island (remember T. O. Morrow was there in 52) and there you have a connection drawn between Red Tornado and the Doom Patrol.

Remember a few months back when we did the Crisis on Earth-Blog? In another attempt to generate some interest across the internet, the Irredeemable Shag has organized another crossover. What is this fabulous new crossover you ask? Well, this post is a major hint. Check back Tuesday, just be sure to do so before the internet cracks in half.
Posted by Doug at 4:56 PM