Deliquency, thy name is Doug.

Sorry friends, it's been a crazy busy couple of weeks since the last post. My extracurricular project (aka second book) imploded, I took a vacation, and also had to adjust my work the week before and after to accommodate my vacation.

Since then, I've been busy trying to get some stuff happening for this little ol' site here. Stuff like an exclusive interview with a certain penciler of this certain series we all are fond of. Yes. That Clark guy. More on that next week.

For now, I'm thinking this might be the final Elasti-Girl Friday, as Giffen and crew are making a push to change Rita's moniker to Elasti-Woman. As "Joe" pointed out in the comments a few weeks ago, Rita has been called "Elasti-Woman" before, but that was in reference from the press, who also dubbed Cliff as "Automaton". With that change, in addition to the series actually being published now, I want to change things up a bit and make things a little more regular.

Will I be publishing every day? Oh heck no. My life doesn't have that much flex time.

I will, however, make a more concerted effort to have at least one post per week. My goal is no less than three, but for now, let's focus on one at a time.

On to the matter at hand. Here's some panels from the first issue of the current volume of Doom Patrol featuring our gal, Rita. I was going to scan the pages from her bungalow, but or the ones where she's dining with Rocky, but decided this sequence was a good place to start.

This is the scene where the team is trying to escape from Buena Suerte. Negative Man has disabled most of the opposing helicopters, but left one for Rita to handle. The first image below is a scan from Matt Clark's pencils. I thought it would be a nice contrast to the finished page that follows. 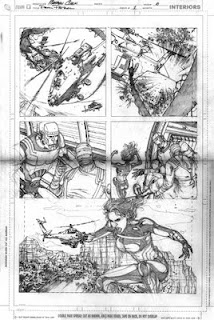 Here's what happens when a mad Elasti-Woman meets a helicopter. I gotta say, when I read this, I laughed out loud at Larry's reaction. Larry's cynicsim knows no bounds. 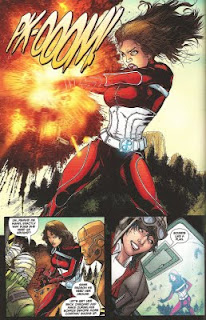 There you have it. The first official Elasti-Woman Friday (just doesn't ring as well as Elasti-Girl Friday) featuring published art from the first issue of Doom Patrol.

I managed to snag a copy of the variant cover this week. I adore that Kong-inspired cover. I'm looking forward to what other covers the crew comes up with.
Posted by Doug at 12:03 AM