So I just got back from a great weekend at the Fan Expo in Toronto. Kind of a long day as far as "jamming things into one day" goes, but it's done. I managed to score 24 issues of Blue Devil, 3 DP Archives (what can I say, I've been delinquent on getting those) and a DCUC Ronnie Raymond Firestorm.

I also got the first two sketches for my Doom Patrol sketchbook - more on those later this week.

For now, I want to share the most recent Doom Patrol-related Source posting. Elisabeth Gehrlein gave us a sneak peek of the third variant cover for Doom Patrol.

Sticking with variant covers for a minute – you’ve seen the Matthew Clark/Kevin Maguire jam variant covers for DOOM PATROL issues #1 and 2 in previous posts. I love these covers very much, so I wanted to show you the final one for issue #3, starring Negative Man and a Metal Men obstacle course. We’ll start with Keith Giffen’s layout, and then there’s Kevin Maguire’s inks, Matthew Clark’s pencils over Kevin’s inks, Matthew’s and Kevin’s inks together at last, and finally the color by Guy Major. 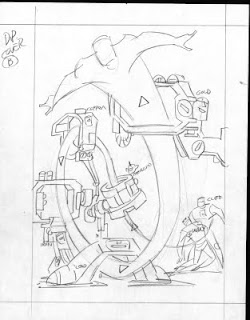 Giffen's rough shown above and the near-final image below. 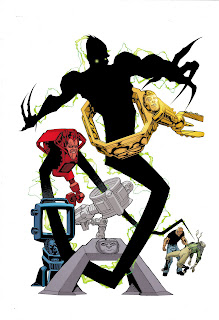 All in all, I'd say this is a well-timed revelation by Gehrlein. She must have known I needed some Negative Monday material.
Posted by Doug at 12:28 AM