Episode 72: Raiding the Larder for Salami with Fractures! OR Salami on the Mind

A little delayed, but here's the post to correspond to the most recent auditory adventures from Mike and Paul! The Doom Patrol-loving duo are joined by Frak on this episode, and, man, do they have fun! Double- and triple-entendres abound as Chief takes his consideration of Madame Rouge to a whole new (only somewhat less pervy)  level and Rita reminds the rest of the Patrol that teamwork makes the dream work.

Here's the skinny from Podbean:

Episode 72: Raiding the Larder for Salami with Fractures!This week Mike and Paul are joined by friend and fan of the show, Fractures, as we take a look back at some 60's shenanigans!!

Cliff provides a couple opportunities for the reader to imbibe this issue, and here is the first one.
That thunderbird (or missile-carrying eagle as we call them in Michigan) better watch out. Chief ain't done bird-bashin'!

That was one wildly entertaining strange read. Readers who may have discovered the team with Volume 6 really should take a dip back into the first volume. Arnold Drake and Bruno Premiani really do the bizarre like no other - from yesterday or today!

With a foe like Videx, the Doom Patrol sure would have been a killer toy line in the 1970s.

The first volume of Doom Patrol is just so much wacky fun. Each issue finds a way to be more wacky than the previous, and the pieces left behind for Gerard Way and Nick Derington to pick up are just so plentiful.

And speaking of Nick Derington, here's a sketch from Derington from his Houston signing - Terry None to sing you a peppy tune to brighten your day. 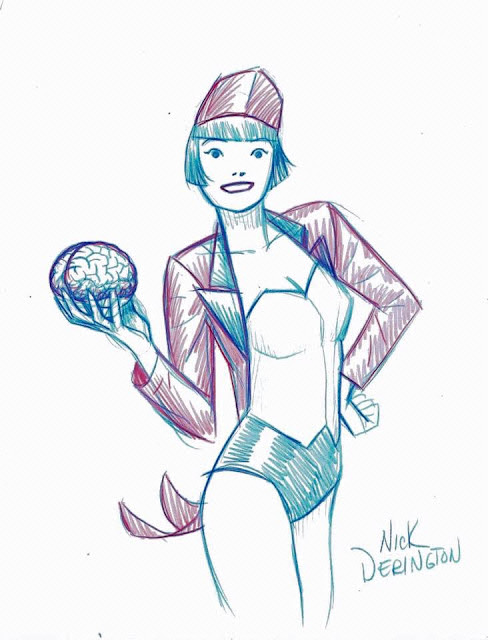 And that's Waiting for Doom Episode 72 for you. The blokes left us with the Question of the Week:
What is your favo(u)rite fictional conflict?