So I've focused a bit on those folks negative. I've also had some killer art from Matthew Clark, but what I've blatantly ignored, mainly because I just haven't gotten around to it, is Keith Giffen's handle on the Patrol of Doom.

Below is one single, solitary panel from issue #4 of the 52 Aftermath: the Four Horsemen mini from last year (or late 2007) featuring Negative Man WRITTEN by Keith Giffen. Here Larry's negativity is rendered by Pat Oliffe on pencils, John Stanisci on inks, Hi-Fi on colors and Pat Brousseau on letters. 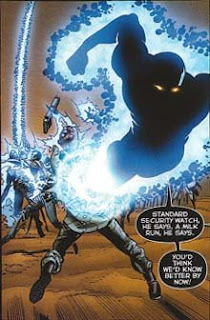 I like it a lot. A sarcastically scalding Negative Man. Negative Man being negative = positive, right?

Note to self, check in with Matthew Clark to see who rounds out the creative team for August's DP launch. . . .
Posted by Doug at 7:00 PM