Let's try and get this train back on track.

Monday in Michigan is kinda rainy, drab, and gray - perfect for a little negativity!

Remember when there would be team-ups between the Justice League and the Justice Society - the teams would splinter off and you'd wind up with fun clusters of heroes? Issue #6 of JLA Year One provides that electricity with the Doom Patrol sharing the limelight. Aquaman and Robotman team together, as do Martian Manhunter, Black Canary and Elasti-Girl. The remaining trio - Flash, Green Lantern and Negative Man also make a terrific trio, using their compromised abilities to topple their foes. 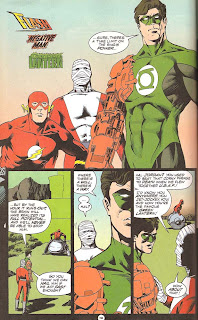 The mysterious group known as the Locus, in tandem with the Brotherhood of Evil, have stolen the powers of the JLA, and in the case Green Lantern and Flash this means they are without their right arm and legs, respectively. Kitson does a good job of creating prosthetics with a Doom Patrol flair as we discover the powers don't make the heroes - their heart does.

Following the return to normalcy (or what passes for such in a book with the Doom Patrol and the Justice League) Waid and Kitson give us a glimpse of the shared world these two teams have. 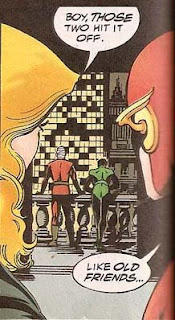 Alluded to elsewhere since then, Hal Jordan and Larry Trainor have worked together in the past and, hopefully, we'll see more of this in the future.

As a fan of comics in general, I always feel a special enjoyment for stories that world-build. Those subtle little nods to the fans of more than one character or more than one book always make me smile. Although not necessarily intended as such, it feels like a shared secret between the creators and the reader. Waid is certainly a master of this art, and this title, especially, hammers that home. If you haven't ever read JLA Year One, do yourself a favor and chase it down, whether it's a copy from a pal, issues from the back issue bins or the copy from the local library. You'll be happy you did.
Posted by Doug at 2:49 AM