Just a little change of pace. Matthew Clark blogged up another sketch recently. He also gave a little insight as to the sketches he's been sharing. 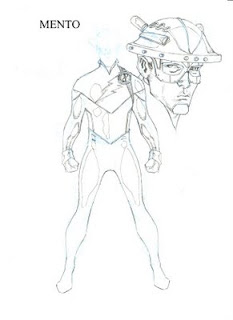 Here's his Mento. Looks cool to me. Some folks in other places raised concerns about the Jay Garrick-like helmet and lightning bolt, but as Matthew states, this isn't the final design.

On his blog, Matthew says, "Working on Doom has been fun and challanging and I'm putting extra time in on the first issue, everyone who's scene pages have left jaws dropped." Maybe I shouldn't say this, but I have one of the dropped jaws.

At lest not until Matthew gives the all clear.
Posted by Doug at 12:02 AM