DC hit us with their July 2009 solicits Monday evening. Let's take a look and see what Doom Patrol-related books might be waiting for us. 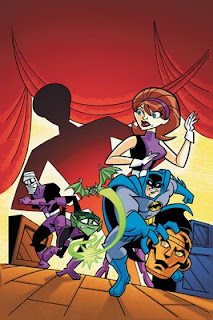 BATMAN: THE BRAVE AND THE BOLD #7
Written by J. Torres
Art by J. Bone
Cover by Scott Jeralds
Here comes the Doom Patrol! And they want Batman to help them out with…General Immortus? But we just shipped him off last issue!
On sale July 29 • 32 pg, FC, $2.50 US

Hot diggity! The Brain has made an appearance on the cartoon, General Immortus is in the issue before this one, but now we get the DP in action alongside Batman! Interestingly enough, in the Doom Patrol's two appearances in B&B prior to this one, they've never teamed up with Batman. Of course, this isn't exactly DC Universe canon, but it IS cool nonetheless. Look for a little more about this very issue right here, real soon. 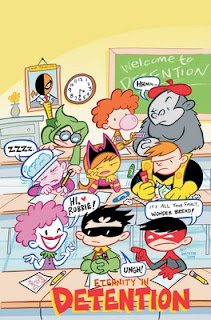 TINY TITANS #18
Written by Art Baltazar and Franco
Art and cover by Art Baltazar
School's over, but the Tiny Titans can't leave yet – they're stuck in detention! How did that happen? Meanwhile, elsewhere in the school, Principal Slade's got some dirty jobs...and Darkseid's gotta do them!
On sale July 22 • 32 pg, FC, $2.50 US 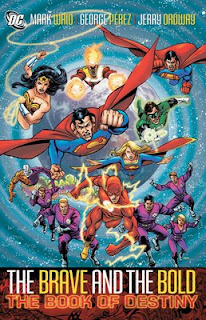 THE BRAVE AND THE BOLD: THE BOOK OF DESTINY TP
Written by Mark Waid
Art by George Pérez and Jerry Ordway
Cover by George Pérez
Collecting issues #7-12 of THE BRAVE AND THE BOLD in trade paperback! The Book of Destiny's been opened, and it will take the combined might of Superman, The Flash, the Metal Men, the Blackhawks, the Atom, Hawkman, Aquaman, the Teen Titans, the Newsboy Legion and more to prevent certain doom!
Advance-solicited; on sale August 19 • 160 pg, FC, $17.99 US

Huh. I wonder why DC left the Doom Patrol off the solicits and cover for the Brave and the Bold TP. This includes the issue where they teamed up with the Flash. Flash is on the cover.
At any rate, not much for the DP here, but August solicits should bring the first issue of the Giffen/Clark/Livesay extravaganza.
If you want to check out the entirety of the July DC solicits, click on over to CBR. They'll be happy to help you out.
Posted by Doug at 6:49 PM