It's Monday and here's some negativity that isn't related to your job or that stupid time change thing.

When we had the Crisis on Earth-Blog crossover last week, I mentioned that Negative Woman played an important role in the outcome of Crisis on Infinite Earths. Today, I'll share. Please excuse the quality of the imagery, the frames are shot digitally from my Absolute edition, the cover of which features the heroes called into the final attack by Harbinger. 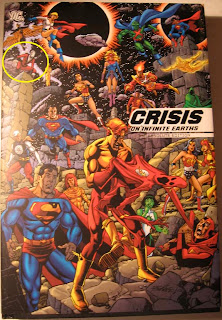 In the twelfth issue of the maxi-series that changed the DC Universe, Harbinger gathers a crew for one last attack on the Anti-Monitor - taking the battle to him. During the epic struggle, the heavy hitters like Captain Atom, Dr Light, Firestorm, Superman (both from Earth-1 and 2, along with Superboy from Earth-Prime), Lady Quark, Jade, Firehawk, Power Girl and many, many more are called into action to unleash their energy-based distance attacks upon the Anti-Montior who is burning under the radioactive touch of Valentina Vostok's negative spirit.

Her call to action from Pariah. 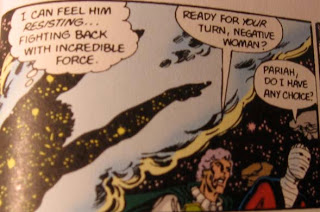 Her thoughts on what may be her final greatest adventure.

Her effect upon the Anti-Monitor.

There you have Val's first appearance on Negative Mondays. Maybe next week we'll get to Ted Bruder.
Posted by Doug at 1:25 AM