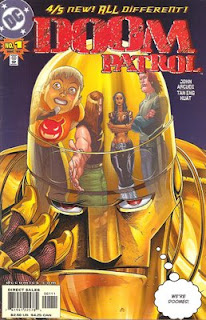 Ted Bruder was a super-powered employee of Thayer Jost, who hoped to create a superteam branded with his sensibilities and guided towards his interests. Essentially the very worst end result of the team Maxwell Lord hoped to assemble in Giffen and DeMatteis's Justice League.

To that end, his team was comprised of four less-than-spectacularly-powered individuals. 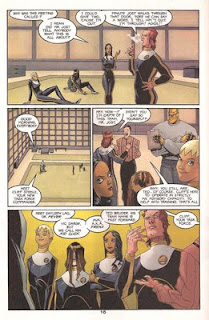 Shyleen Lao aka Fever had the ability to increase the molecular vibration of objects so they would heat up.

Vic Darge aka Kid Slick could eliminate friction around his body.

Ava aka Freak who possessed prehensile hair, much in the same manner as the Inhumans' Medusa.

Originally dubbed "Fast Forward" for his power of prescience, Ted Bruder was soon (second issue of the third volume) branded with the nickname "Negative Man" due to his consistent brow-beating and complaining about anything and everything. Ted, it seems, was one of those people who would complain about having nothing to complain about. 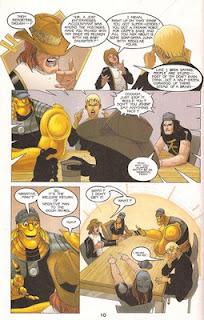 In his first encounter with Robotman, Cliff warns him to look thirty seconds into the future as Ted gets carried away yelling at Cliff. Deciding to back up a little to avoid getting his clock cleaned by Robotman, Ted begrudgingly allows Cliff to begin consulting the team.


Besides having some amazingly amazing art from then-unknown Tan Eng Huat, this John Arcudi-penned series was every bit as quirky as any interpretation of the Doom Patrol. It embraced the DP legacy while trying to deepen the legend. 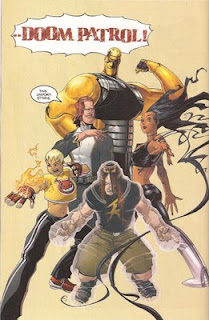 Robotman, however, wasn't really quite Cliff Steele, as I'll cover at some point in the future. Maybe Ted can clue us in as to when that'll be. . .
Posted by Doug at 7:46 PM