Today, throughout the multiblogiverse, blogs are dying, blogs are living, but most importantly blogs are celebrating one of the greatest crossovers ever told: Crisis on Infinite Earths. Well, maybe not the entire crossover, but one of the most critical images from the crossover.

It may not have been the first, nor the last, crossover, but it set out with a purpose and (for the most part) achieved that purpose. CoIE set out to streamline the DC Universe. Characters were slated to die, others were created for this series, but virtually no character was left untouched.

The DP were called upon to act during this time of Crisis, under the red skies, alongside every other hero. Although their appearances were extremely limited in this event, the Anti-Monitor would never have been defeated if not for Negative Woman. We'll cover that here on a Negative Monday.


As provided by the Irredeemable Shag (of Firestorm Fan and Once Upon A Geek), here we will be covering the Patrol members as they appeared on the George Pérez drawn and Alex Ross painted Crisis on Infinite Earths collaboration from 1998 used as the cover artwork for the first ever collected version of the Crisis on Infinite Earths. This was additionally marketed as a poster, used on the Absolute Edition slipcase, and featured as the cover for the trade paperback.


The Doom Patrol, such as it was during this time, also found itself participating in the Crisis. Recently relegated to comic book limbo, the DP at the time was Paul Kupperberg's and Joe Staton's rendition first introduced in Showcase #94. 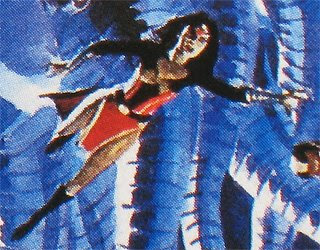 Arani Desai, claiming to be the wife of Niles Caulder - the Chief. Pérez rendered Celsius either doing the Egyptian or swimming through space. At this point in time, Arani was the de facto leader of the DP, who were sidetracked in the quest to find Niles Caulder.

Valentina Vostok, the host for the Negative Spirit in the guise of Negative Woman. Negative Woman played a critical role in the outcome of the Crisis, traveling with many of the heavy hitters in their bid to end the Anti-Montior's reign. 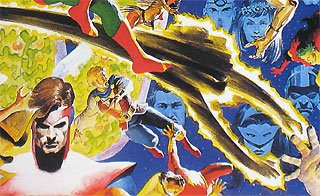 Joshua Clay, the hot-tempered Tempest. In this image he is separate from his team, both feet firmly planted on the ground. 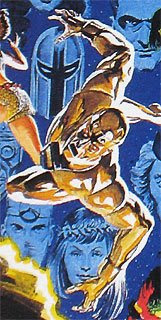 Robotman v2 (or v3, depending on frame of reference) differently, Pérez put Cliff back in a body that more similarly resembled his original visage. Looking as though the world was yanked out from under him, one can almost here Cliff give warning, "Look out below!" 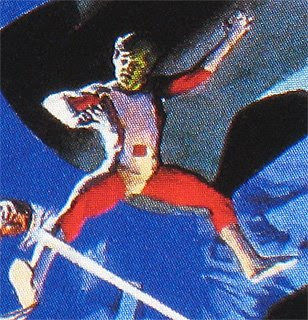 Also present throughout the entire Crisis was former Doom Patroller Changeling, formerly (and currently) known as Beast Boy. Garfield Logan was at his peak in popularity during this series. As a member of the Teen Titans, most fans never had any idea he had once run with such a cluster of freaks like those in the Doom Patrol. 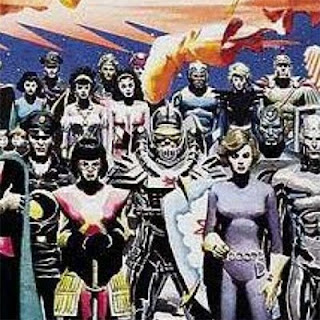 Mento made a split-second appearance and an even smaller appearance on the cover. That's right, Mento is under the Flash's boot. A last minute add, perhaps, but a testament to the abilities of Pérez and Ross that even at near microscopic size, this character is still recognizable.


Below are the highlighted actual locations of the DP in this vast galaxy of DC characters. As you can see, this is a veritable "Where's Waldo?" of the DC Universe. The first appearance of this image above is clear of all markings. Click on it and try to find your favorite DC characters.

Some other characters to look for (complete with relevant links to find them on) are Firestorm, Flash (you'd have to close your eyes to miss that), Aquaman (and what better excuse to discover or rediscover the Aquaman Shrine?), Phantom Stranger (another fabulous Rob Kelly-powered site), Green Arrow (who had an even smaler role in Crisis than the DP), Hawkman (one of which was supposed to die during Crisis, but Katar Hol was enjoying the good life after a successful Shadow War), Plastic Man (another fabulous blog from Rick of Mail It to Team-Up fame), Martian Manhunter and the greatest incarnation of the Justice League ever - Justice League Detroit (both from Frank Lee Delano).

Extra special thanks to Shag for organizing this Crisis on Earth-Blog!
Thanks also to Rob! for the masthead and Rick for the uber-cool video.