First things first - yes, this is terribly late. Or not really, after all, it is still Monday.

Secondly, sorry to string you along Ted Bruder fans, but maybe next week.

Yeah, I'm taking the easy way out here, this week, Negative Monday features the Who's Who entry for Valentina Vostok. She first exhibited the negative powers not as a dispatchable spirit, but rather could transform herself into an energy being. 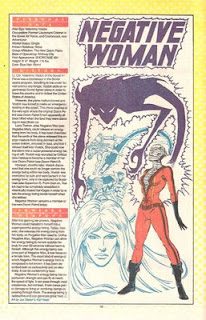 As time went on, however, her powers came to manifest themselves in a manner nearly identical to that of Larry Trainor - the Negative Man. The major difference was that Vostok's expression of the negative being was decidedly female in silhouette.

The commonality ad mutual familiarity with the Negative spirit would eventually lead to a struggle between Vostok and Trainor.
Posted by Doug at 5:04 PM