Longtime followers (c'mon! It's been almost a year and a half!) of this blog (or my reviews over at CBR) know I have some mad love for the Agents of Atlas. 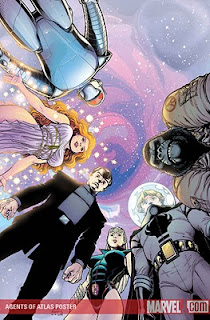 Sadly, word has come down from on high (well, actually from over at Comics Alliance) that Atlas is being cancelled with issue #5. Well, not cancelled. It is going to cease being published though.

Parker got in what seems like a dig on DC by saying,


Anyway, our orders for ATLAS 1 started off in the low 20ks, which isn't surprising because a lot of things are coming in low right now, and we've always been on the fringe. Atlas has actually always sold better than a lot of books that get to go on much longer- a good bit of DC's line.

The DP's numbers, however, aren't that great. According to the Comic Chronicles, May's numbers for Doom Patrol #10 were 12,334, putting it in spot #140, 52 spots below Atlas #1. Interesting to me that this is enough for a DC title (DP was a few slots above Jonah Hex, which is still pumping out month after month) but deemed a borderline failure for Marvel.

Don't let this happen to the Doom Patrol. Spread the word. Buy an extra copy. Start a blog. Donate a copy of the trade to your local library. Do something. Like, maybe check out Atlas in one of the myriad of trades that title has garnered over its distinguished existence. The come back here and let me know what you think.

Check out Jeff Parker's page for some more thoughts on the matter from the man himself.
Posted by Doug at 5:49 PM