All of these ideas and no time to deal with them!

J. T. Krul is taking over the writing chores on Teen Titans and bringing Nicola Scott with him to handle the art. The Source covered this in greater detail last week, and you can read about it there. 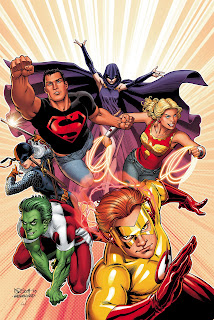 Nicola Scott popped by Newsarama and had a conversation with Vaneta Rogers. Over the course of their conversation, Nicola mentioned


And I love Beast Boy's little tooth that sticks out. Some artists do the tooth but others don't. And the artists that do it sometimes don't do it in every panel. But I'm quite big on consistency. I like to see the same face on the same characters over and over again.

I'm with Nicola on this one. It's a nice variation to the character and it helps keep Gar from being just a green-colored kid. The Teen Titans cartoon from a few years back is the first place that I recall seeing this look for Gar, and Nicola's drawing of him seems like a natural progression of where that character might be nowadays.

I know this is, at best, a tangential connection to the Doom Patrol, but Gar is still family, whether he's in this book or not.

Personally, I've been down on Teen Titans for at least a few years now, but that looks like it might change, if Nicola Scott's enthusiasm makes it through to the printed page.
Posted by Doug at 7:42 AM