A little curveball and we're back! Just a day late, but back nonetheless. 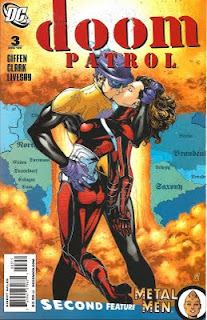 Doom Patrol #3, for me, was the moment things start really clicking. Cliff is getting more than a little fed up with Larry, Mento makes the scene and establishes himself as the ultimate supercreep, and the team takes down a menace in a new and unusual way. 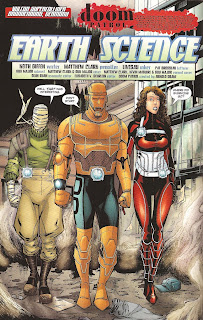 Giffen drops a vast amount of technobabble on us, but with a re-read, that techie talk will seem just as fresh as the first.

Seeing as these pages were previewed over at the source, here's just a snippet of Steve Dayton's creepiness. 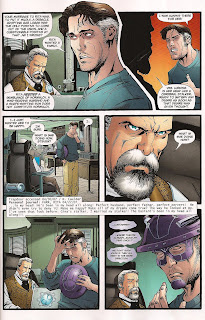 Later on in the issue, we learn a little more - a little TOO much about Dayton's vicarious living. Uber-creepy as I told Matthew Clark.
This issue really seemed to bring it all to the table for me. Doom Patrol is not occurring in a vacuum, and the characters interact with purpose. On occasion, that purpose may be perverted and disturbing, but the Doom Patrol has never been a happy sunny comic to share with kindergartners. To this point, Giffen has done a solid job of establishing this iteration as a more complex take on the heroes, with a large amount of graytones in morality.

I am a little put off by the ending and the team's decisions in returning to base, but I figure Giffen has his reasons. 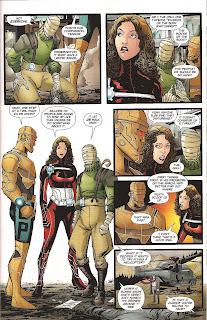 Matthew Clark's art is solid and steady here. A large amount of the characters in this issue are faceless - or rather star-faced, which I am certain presented some challenges uncommon to a traditional comic. Clark's work in this issue is spiced with some additional design elements, such as a recurring target-like circular frame. Carried through the issue, this element is simple, but effective. Clark is doing a great job of making this HIS book.

Concerns I have about this series to this point are pretty specific: the story has a lot of depth. With that depth, Giffen jams a massive amount of information onto each page. I like the journal peeks, the character notes and the email snippets, but I'd like to see them treated a little more substantially in terms of graphic design. For now, they seem like ancillary pieces of the story, but when read add a considerable amount of depth to this tale.
My second concern is the pacing. Right now, it seems as though Giffen is throwing things into the book to accommodate a checklist of sorts. While this expands the universe around Caulder's strikeforce, it also feels hurried in spots. The second to last page is a perfect example of this. I don't see Cliff stepping aside for this, but there it is. 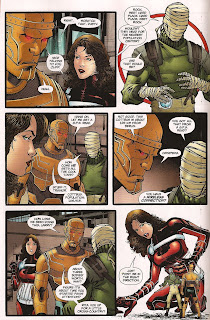 This issue wraps up the first arc, and clears the decks for Blackest Night. It almost feels as though this issue wrapped itself up quickly solely to make room for Blackest Night. With that, Matthew Clark will take a hiatus from the art chores for two issues, set to return with issue #6. Hard to imagine that the next time we see Matthew Clark Doom Patrol art, the title will be hitting the half-year mark.
Posted by Doug at 6:44 PM