Each year, my lovely wife allows me to get my geek on and disappear for a weekend to hit a comic convention. The past couple years, I've gone to Baltimore, before that Chicago. This year, I decided to hit Toronto. Armed with some good ol' US cash ready to be changed to Canadian bucks, I hit the border, set to flex the power of the new enhanced Michigan Driver's License. The enhanced license allows Michigan residents to cross into Canada without a passport. Kinda handy to have, since the passports take a while to get and all. Also, the Michigan Enhanced license is only $15 more than a normal license, which is roughly half the cost of a passport.

Of course, you didn't come out here today for a lecture on the Michigan enhanced driver's license. No sir. You're here for this: 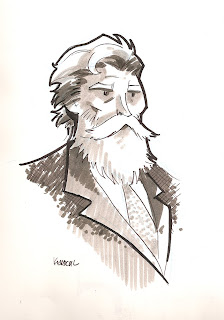 The Chief, lovingly -and most unexpectedly - drawn by Karl Kerschl, of Wednesday Comics Flash and the Abominable Charles Christopher fame.

In the past, I've collected (is it truly collecting if you only get one or two here and there?) sketches with a common theme or character. In Chicago back in 2006, I compiled a sketchbook with the members of the Justice League- Detroit era. I've got more than a few Animal Man drawings. I scored a high-watermark (with watercolors) Barry Kitson Firestorm from Mid-Ohio in 2007.

On this trip, however, I decided to bring a new sketchbook and collect up some DP sketches. I found Karl, with a very short list - he was the first person I pushed the sketchbook towards on Saturday - and he graciously pulled this together. I gave him free reign, any Doom Patroller he wanted to draw. Needless to say, I wasn't expecting Niles Caulder to be the first member of the Doom Patrol to hit the sketchbook.

After picking up my book from Karl, I decided to hit his Transmission X teammate, Ramón Pérez. Ramón has done a number of things, all over the board, from Star Wars: the Clone Wars stuff to some issues of JSA Classified to his own webcomics Butternut Squash and Kukuburi. I cannot recommend Kukuburi enough, as it is easily the most beautifully drawn webcomic I've come across (sorry, Karl, yours is flat-out great, but Ramón's is eye-popping).

I was kinda hoping Ramón might give me the first Rita Farr to grace the pages of this sketchbook, but alas, he chose to draw: 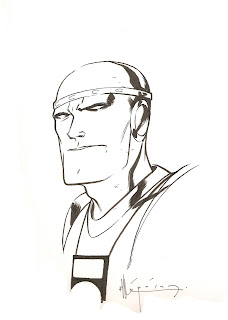 Sure, a pair of sketches may not be earth-shattering, but to start off a sketchbook with pieces this fun is more than I hoped for as I drove over to Toronto for the weekend.
Posted by Doug at 12:24 AM