I've got to admit, I'm enamored with Heroclix, but I have absolutely no clue how to play the game. The figure assortment allows for molded bits of plastic featuring characters who otherwise don't exist in the round. It also features tons and tons of characters that saturate the market otherwise, but it's a nice additional niche for comic fans to dip their collecting toes into.

I'll occassionally pick up a 'Clix (is that even proper slang?) or two at shows, and have amassed a nice collection of characters I like, including most of the Doom Patrol. Since we started talking about the role playing games with Gar, I think we'll start a Heroclix investigation with Salad Head, from the DC 75th Anniversary Heroclix set coming out that it includes a wide array of Gar. 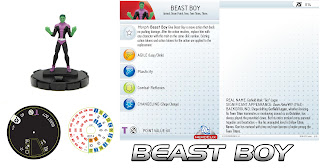 While I don't have any of these new Beast Boys, I'm certainly keen on expanding the set I do have with, at the very least, the T-Rex. How awesome is that? I have less than no clue how to play this game, but that doesn't stop me from recognizing coolness. Hopefully some other Doom Patrollers will get some love in this 75th Anniversary set. 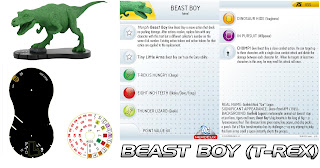 Here's a look at the first Gar Logan-related Heroclix, which branded the boy as "Changeling." 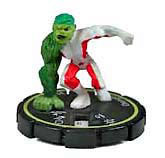 As I previously mentioned, I've got a pretty good cross-section of the DP, and it seems as though the Heroclix makers sought to make a cross-section rather than single out any one specific lineup. My Heroclix DP includes the Gar shown above, Elasti-Girl (sold as part of a Giants collection that included Chemo and Atom Smasher), Robotman, Mento, Chief, and Negative Woman. They'll all get a turn in the spotlight here eventually.
Posted by Doug at 6:43 PM