The colors are the first thing I noticed on this Twart piece. It's a simple gradient, red-to-black, but it is applied to the line art rather than the background, so it presents a different vibe altogether. Pretty sharp! 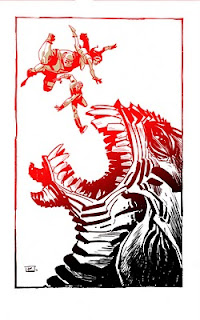 This one's by Firebreather co-creator, Andy Kuhn. Kuhn's work, moreso than his fellow Twartists, tends to take the subject on from a wider angle. In this case, the DP are small compared to the beastie they're about to be consumed by. Looks like a fun tussle in the works. I'd like to see DP team up with Duncan, or at the very least make a journey over to Dinosaur Island. That's gotta be somewhere near Oolong, right?

Kuhn had this to say of his piece:


I don't know much about the Doom Patrol,but I always thought they were pretty cool characters.
I bought all the issues that Ted McKeever drew,
so that's something. Thanks for looking.

While we're talking Firebreather, I once interviewed Andy's co-creator on the book, Phil Hester, for Comicbloc.com. Among the questions I asked Phil was, "What's your 'holy grail' - what one thing do you have to do before leaving comics?"
Phil's answer, "As a writer, the Fantastic Four and Doom Patrol. As an artist, Ragman or OMAC (the real one). The Question would be cool, too." Think about that and take another look at the image above.
Posted by Doug at 12:37 AM