March 1, 1924, the world got a little bit more creative, but no one quite realized exactly how much more at the time. Why? Arnold Drake was born.

Arnold Drake, co-creator of Stanley and His Monster with Win Mortimer, Deadman with Carmine Infantino, Guardians of the Galaxy with Gene Colan and our very own Doom Patrol with Bruno Premiani. 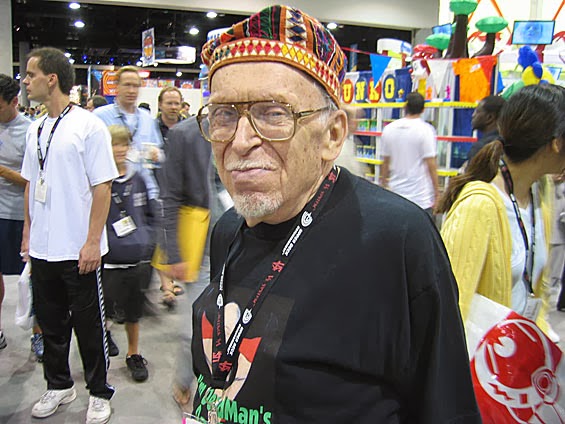 I lifted this photo from CBR, but found another one on the internet that has a much more clear shot of the image on his shirt. Attributed to Edward Liu, the image shows Drake's shirt from the front. On it is an image of Boston Brand in his Deadman get up. Below that bust is the caption, "I'm Deadman's Daddy."

Without Drake, there would be no Doom Patrol, no Deadman and no Guardians of the Galaxy*. The latter two have experienced differing results from Hollywood dalliances, while DP and Deadman have found glorious opportunity in animation. Regardless of their success to translate to other media, there is no denying many of these characters have captured the attentions, imaginations and hearts of fans everywhere. For that, Mr. Drake, I say THANK YOU!

*The Guardians of the Galaxy that Mr. Drake co-created DOES NOT include Rocket Raccoon, Groot, Star-Lord, Drax, and Gamora. Drake crafted the original roster of Charlie-27, Vance Astro, Martinex, and Yondu.
Posted by Doug at 12:00 AM

Labels: Arnold Drake, Deadman, Guardians of the Galaxy, Stanley and His Monster