A long time ago, when video games were housed in upright coffins and cost a quarter to play, there were a slew of role playing games on the market. These role playing games encouraged the participants to use their imagination and to project themselves into the worlds of their favorite comic book characters (or other worlds, but this is a Doom Patrol blog. We've got priorities here). 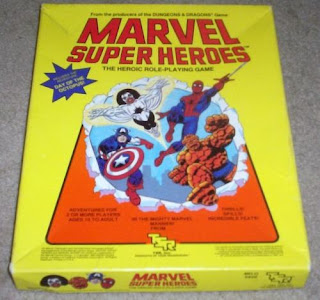 My mom, citing my love for Spider-Man, bought me the Marvel Super Heroes game one year. I don't remember if it was for my birthday or Christmas, but I do remember playing the game darn near every time my buddy Brock came over. The two of us never really read the rules, but that didn't stop us from having a great time acting out our Marvel Universe faves. Brock was always using Daredevil and Sasquatch, I gravitated towards Nightcrawler and Beta Ray Bill. Yeah, even in the Marvel Universe I was a fan of the freaks.

What does all of this have to do with the Doom Patrol? Not a whole heckuvalot to this point.

The Doom Patrol eventually became available as characters over on the Mayfair DC gaming system. Growing up, I knew better than to press the issue with the folks and try to weasel another entire gaming universe from them, after all these things weren't cheap. The books were something like $6.99 or such. So long story short, I never had a chance to revel in the glory of the DC game, even though I was by and large a DC fan. 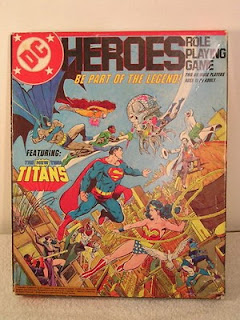 Frank - of more blogs than I can even think about managing (including Justice League Detroit and the Idol-Head of Diabolu) - provided me with a Doom Patrol-related scan to share with you all. The boxed game came with, as Frank referred to them, "75 amusingly cheesy character cards." One of said cards just so happens to feature Mr. Green Genes himself - Changeling a.k.a. Beast Boy a.k.a. Garfield Logan. Have yourself a peek. 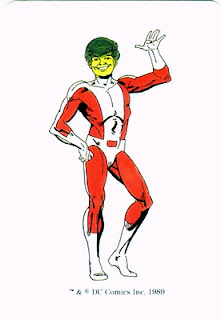 Nice little drawing of Gar striking a pose and giving a little wave to you right over there.
Here's the back of the card with Gar's stats. Much like the modern-day Heroclix, these stats listed below leave me totally clueless. I presume the higher the number the better the stats, and that all of Gar's single-digit entries don't really add up to much for everyone's favorite green-skinned adventurer. 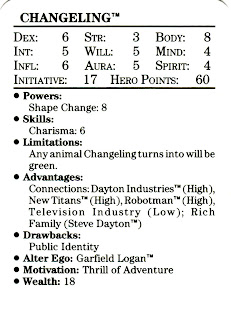 It is nice to see Robotman listed as an advantage though.
As I already mentioned, Frank of blogs aplenty organized a crossover of the Blogoverse to thrill all over the the course of what is collectively being referred to as Mayfairstivus. Maybe I'll celebrate by finally buying that Doom Patrol Sourcebook. 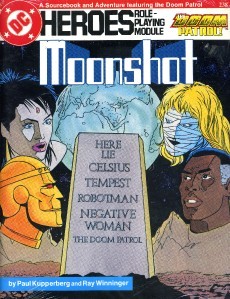 Be sure to check out these other blogs regularly over the next couple of weeks for more Mayfairstivus memories and awesomeness.