So I posted a bit about the issue coming out on Wednesday and included this cover image. 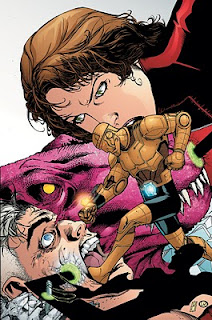 Then I posted a link to the Source's preview of this issue. They used this cover image. 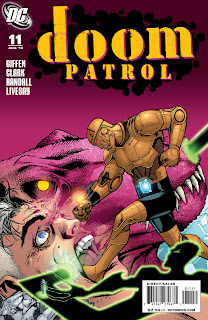 Where'd Rita go?!?
Once you read the preview (and/or the issue itself) it'll become clear where Elasti-Woman went.
Finally, being a picky former art director (operative word there being former) I'd like to gripe about the background being so close in tone to the T-Rex side of AVM Man's noggin. Poor planning there.
Come back a little later for my latest hare-brained theory on Thayer Jost. . .
Posted by Doug at 5:40 PM