Looks like we're in for an extra treat or two in May.

As my friend, Petar, covered on the Doompedia earlier (like yesterday) the Patrol will be in the May issue of The Brave and the Bold #34. This is their second time appearing in this current incarnation of the series. Here's the cover and solicit: 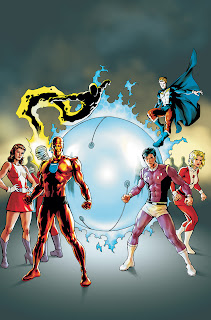 THE BRAVE AND THE BOLD #34
On sale MAY 19
32 pg, FC, $2.99 US
Written by J. MICHAEL STRACZYNSKI Art and cover by JESUS SAIZ
Don’t miss this first chapter of a most unexpected two-parter! This wouldn’t be the first instance where the Legion of Super-Heroes have gone back in time looking to add to their ranks. But the sheer craziness the Doom Patrol will bring into their lives just might make it the last time... and the Legion’s mission will lead to some rather unexpected consequences next issue!

I've been really enjoying JMS's run on B&B. It's been fun so far. 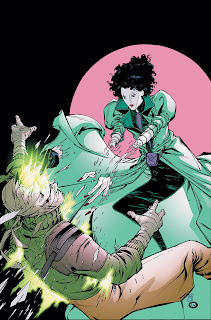 DOOM PATROL #10
On sale MAY 5 32 pg, FC, $2.99 US
Written by KEITH GIFFEN Art by MATTHEW CLARK & RON RANDALL
Cover by MATTHEW CLARK & LIVESAY
What looks like a life-size statue washes up on the shore of Oolong Island and all hell breaks loose – the Porcelain Assassin has arrived! The Doom Patrol focus all their efforts on fending her off, but the fight isn’t nearly as brutal as the revelation of who sent her!

"The Porcelain Assassin" - cool! One of Matthew Clark's contributions to the book front and center.

And also the first of the trade paperbacks for the new DP.

DOOM PATROL: WE WHO ARE ABOUT TO DIE TP
On sale JUNE 9 144 pg, FC, $14.99 US
Written by KEITH GIFFEN Art by MATTHEW CLARK, JUSTINIANO & LIVESAY
Cover by MATTHEW CLARK
The first issues of The Doom Patrol’s new series are collected as the team deals with a black hole and comes face to face with death in a BLACKEST NIGHT tie-in.

. . . and some more reprinty goodness featuring the Doom Patrol (albeit it's a former DP). Good stuff here, all in black and white! 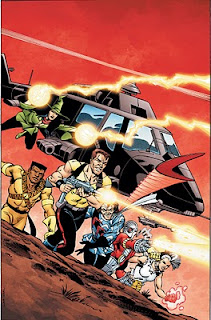 I pulled the info straight from Comic Book Resources, if you want to check out the rest of the solicits for DC in May.

Along those lines, Giffen is starting his run on Booster Gold with J. M. DeMatteis and Chris Batista. It looks like it's going to cross over with Giffen and Judd Winick's biweekly extravanganza Justice League International: Generation Lost. For some odd reason, I've seen more than a few people point out how much Booster looks like Michael Keaton on this cover, but no one mentions that Ice looks like Teri Garr. 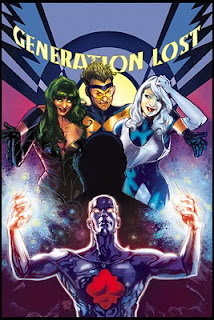 Completely unrelated to the Doom Patrol is the release of Brightest Day. Rather than go with one weekly series for the summer, DC is running two biweekly series. Kiss your wallets goodbye my friends!

While we're throwing money away, in the interest of fairness to both of the big two, and of (potential) particular interest to Doom Patrol fans, Marvel brings the Agents of Atlas back in May under the title of Atlas. If you haven't checked out any of the previous (the six-part mini or the eleven issue series or the Versus minis featuring the X-Men and Avengers) Atlas stories by Jeff Parker, you really should. They're good, clean, Silver Age fun - and they even have a talking gorilla. 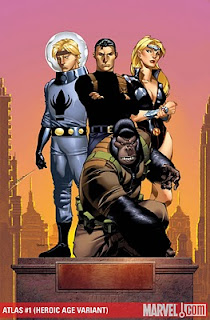 Check out Marvel's May solicits here.
So what are y'all looking forward to in May?
Posted by Doug at 4:12 PM