From The Fwoosh, here's some images of the Negative Man figure from the yet-to-be-formally-announced DC Universe Classics line. The Fwoosh, in my opinion, tends to be a little out front of the announcements as the happen. Action Figure Insider is my preferred site of choice for news on all things plastic, but this is some great news for Doom Patrol fans.

This set will include:
Wondergirl - the Donna Troy version
Superboy - the Conner Kent version as he originally appeared
Cheetah - two versions, the classic Super Friends version and the more modern - but not current appearance - George Pérez version
Cyclotron
Blue Devil - the original look for Mr. Cassidy
Blue Beetle - Jaime Reyes
and our very own Negative Man. 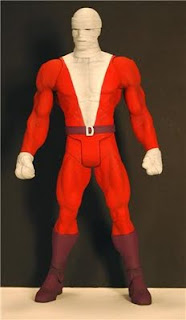 From what I gather, Larry is going to be the variant, with his "negative face" showing. 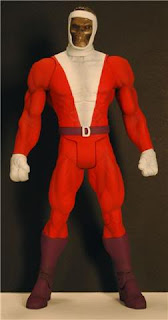 The collect-and-connect figure here will be Trigon. After all, they have to string us a long a little farther before they give us Rita, right?

I'm a little puzzled by Mattel's choice to go retro with the appearance of Larry Trainor, as I think Matthew Clark's design is top notch and would make a more dramatic action figure. Who am I to complain? At least we'll be getting a Negative Man action figure!
Posted by Doug at 12:43 AM