History of the DC Universe

The Doom Patrol made a pair of appearances in the second issue of the two-part History of the DC Universe by Marv Wolfman and George Pérez, neither of whom were strangers to Cliff Steele's band of comrades. The creative duo introduced Robotman (and by literary osmosis, or flashback sequence, therefore, the Doom Patrol) to a new generation of readers in the pages of the New Teen Titans.

Click on the image for a larger, readable version of the first of two pages. 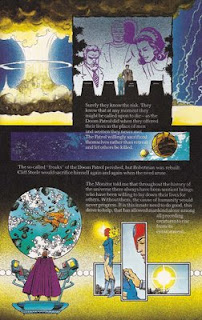 The so-called "freaks" of the Doom Patrol perished, but Robotman was rebuilt.

This would not be the first time, nor the last time, that Robotman was rebuilt, thankfully. I'll get around to highlighting more of the rebuildings in the weeks and months to come before the next volume of Doom Patrol hits the stands. Next up, however, will be the second appearance of the DP in History.
Posted by Doug at 5:17 PM