The three next issues of DC/Young Animal's Doom Patrol have all been pushed back one calendar month.Doom Patrol #9 is now scheduled for release October 18. The issue was originally solicited for a June 28 release, but those orders were cancelled with the issue being resolicited later on for a September 27 release.Doom Patrol #10 and #11 have likewise been updated to November 8 and December 6 release dates. 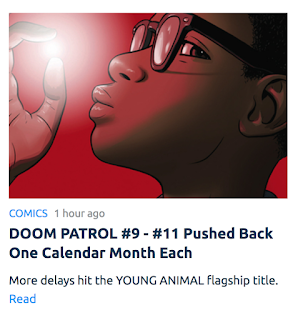 The article goes on to say that no official reason is provided. I'm pretty sure they're delayed because Doom Patrol wants me to catch up on my other reading and a couple writing assignments.
Posted by Doug at 9:22 AM