The Source has a nice little sneak peek inside the second issue of Doom Patrol. Unfortunately, the Source also says the book will be out on September 9th, which won't be true here in the States, due to the Labor Day holiday. Look for it at your favorite comics facility on September 10 instead.

Rather than repost them all here, I'd like to point you there. 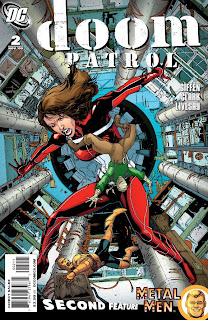 And the variant cover by Clark and Maguire. . . 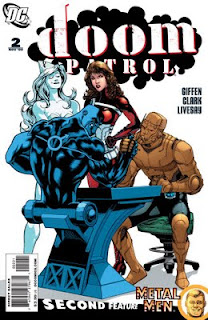 If you need some more inspiration to pick this book up, here's the solicit text.

It’s a black hole, but it’s not a black hole. If you’re a Doom Patrol fan, that made perfect sense. And even if not, then you’re in for one hell of a ride as the Doom Patrol face off against the most annoying alien this side of G’nort. Who’s G’nort? Do we have to spell it out for you? Oh, and the Metal Men in space.

Let's just hope G'nort stays in the solicit.
Oh, all right, just because you asked so nicely. . . here's a couple of panels from the preview.

A little old, a little new. . . this ranting fellow above sure feels like a panel from Doom Patrol as it is meant to be.
Posted by Doug at 10:29 AM